The photographs of Luc Pagès are underwater photos sublimated on the acrylic glass material and its glossy effect. Discover his images, his unique creations, printed for your wall decoration.

Who is Luc Pagès? 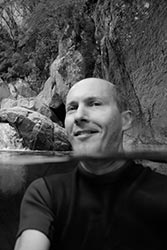 Luc Pagès, a French photographer, has his own, distinctive way of photographing the environment. Originally trained as an architect, he's been fascinated by the natural elements around him since the very beginning of his career. His shots are perfectly conceptualised, impeccably executed and expertly developed, creating a sophisticated final image. Europe is his creative muse; he scouts out rich and varied natural forms to enhance the quality of his photos. He's currently working on a series of exceptional underwater photographs mainly taken in Corsica. The use of light combined with the beauty of the sea bed is breathtaking.

His photography reflects his stance on a number of issues. He believes the way he views the world and its many forms is a result of his own personal interpretations and specific mental constructions. He is constantly on the lookout for angles wherein the most diverse and unique natural materials can be contained and juxtaposed within one shot. His aim? To bring to light subtle combinations that allow observers to indulge in a dreamlike escapism. His choice of subjects reveals a clear fondness for elements with a mineral character, elements in which the issue of form and its origins can be read more immediately and distinctly, in contrast to other formal registers, like that of plants for example.

Subscribe to our newsletter and win 10% on your order

You may unsubscribe at any moment. For that purpose, please find our contact info in the legal notice.