Etienne Morel has been photographing nature for many years, and he loves finding unusual environments. He started photography at the age of 14, and his style has been developing ever since. Light, birds and landscapes are his main inspirations. Discover his work through this collection of decorative canvases.

Who is Etienne Morel? 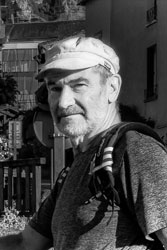 Some words from the photographer

"I discovered photography at the age of 14 when I was at boarding school in Orléans. During the evenings, a supervisor introduced us to the magic of creating images, from taking the shot to developing it in the darkroom. This extra-curricular activity became my passion, much to the dismay of my parents who saw me opening my camera bag more often than my schoolbag.

My first camera, a Voigtländer Vitoret 24x36, wasn't automatic in any way, nor did it have a rangefinder or cell. There wasn't so much technology to help take the shot back then, you almost had to take an educated guess. When I saw something I wanted to photograph, I had to "feel" the light before pushing the shutter button. I think this is why I'm so drawn to light today and why I like to magnify it. Whether it's soft, warm, subtle or blaringly bright, it'll always fascinate me. It still creates the foundations for every successful image.

When I was 16, I was given a beautiful Canon FTB and its 50mm f:1.8 allowed me to indulge in more precise and technical photography. I worked on their development in the darkroom, with enlarger and chemicals, in the basement of my family home. I particularly liked using Kodak Tri-X Pan film developed with Acufine, sometimes at 1600 iso.

But soon another passion began to capture my attention and music became my new means of expression. When I got older and could no longer afford the rehearsals and concerts, I turned to other hobbies such as computers, carpentry, videography and sports. I only practised photography within a family setting.

In 2009, following surgery that resulted in me needing to take a few months off work, I decided to get back into photography. With my right arm in a sling, I first practised computer retouching. Then I read the entire manual for my new bridge, a booklet full of new functions and terms that were totally meaningless to me. Then, I started going out and taking photos once my physical condition allowed it. I realised that the new, powerful digital camera technology didn't really change the basic rules of photography. The notions of framing, depth of field and light remained, and will always remain, relevant."

Our meeting with the artist

We met Etienne Morel at the Phot'Aubrac festival and added his image collection in 2021. A quote that represents his mindset as a photographer is this: "It is not the landscape that is small, it is the window through which you look at it" (Tibetan proverb).

Subscribe to our newsletter and win 10% on your order

You may unsubscribe at any moment. For that purpose, please find our contact info in the legal notice.